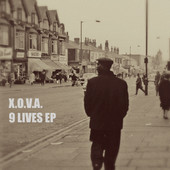 9 Lives video by Xova is a short dark movie featuring the struggle of a man with a hidden past who is trying to put his wayward ways behind him whilst coming to terms with his present day love relationship and realizing what is more important before it is too late.

The film shot on location in Battersea Park, Albert Bridge and surrounding area’s in London also features cameo roles by the band XOVA themselves, and was a Sixty Clicks Film Production and was directed by Alex Kyrou who has worked with the likes of the legendary UK Film Director Tim Burton ,The lead actor in the 9 lives Video remembers all the many good times with his love whilst encountering being kidnapped and held hostage and has flashbacks of what he is likely to loose…is he too late, how many lives does he have left….

The Track is the lead single from their “Soho Road Sessions EP”, and will also be included on new album SYNCHRONISE YOUR LEADERS which is being released on Bournemouth label “Streets Music” in early 2015.

The band themselves are building a great reputation as one of the finest live bands around even winning a slot as the best unsigned bands in the UK from 3,000 bands who applied to Play at the massive ISLE OF WIGHT FESTIVAL in 2013

Support slots with legendary artists like ALI CAMPBELL [ UB40], THE BEAT, SKATALITES, SPIN DOCTORS, JIMMY CLIFF and The SELECTOR to name a few

They are also very proactive in supporting the CROHNS & COLITIS UK Charity and are following up 9 Lives with a single to raise awareness for them called LITTLE LION This can be brought from Itunes: https://itunes.apple.com/gb/artist/xova/id336137705
http://www.xovamusic.com
http://www.reverbnation.com/xova

Name: Mikey Nanton
Biography: XOVA (pronounced Crossover) are a multi-genre band who fuse Pop with a modern mix of Reggae, Rock, Ska, Indie, Motown and folk. The past few years have seen the six-piece perform support slots for The Spin Doctors, The Beat, The Selector, The Dualers, The Moulettes, and Ali Campbell (UB40), between their own tour dates. With an ever-growing live reputation, they won a slot at the 2013 "Isle of Wight" Festival from over 3,000 entrants as one of the best unsigned bands in the UK. (Tom Robinson, BBC6 Music)"This is one of the tightest bands I have heard in a very long time" (Claire Balding, BBC Radio2) after Playing (Little Lion)"I really Like this, it's quite Wonderful - Thurs 13th April 2014" (Foxy and Guilliano, Free Radio - Birmingham) after their Exclusive Play of (Your To Blame) 1st April 2014 "Xova Sound Brilliant, we really want to see these guys Live " (Darren - Tramlines Fest 2014)"The Best Live band i've booked in 20 years promoting " Fired up by social and political unrest, as well as affairs of the heart, inspired the band towards the end of 2014 to release a new remix of "You're to Blame" from their first album "The Pressures of Life". They also re-released "Little Lion" to once again help and aid the charity "Crohn's and Colitis UK" in their bid to bring awareness to the everyone who listened about the disease. Their best Single releases to date "9 Lives" and "Tears" (taken from their "Little Lion EP") has earned and gained them lots of Radio airplay on many Stations around the World, along with adoring Fans who Love their music. The band are now Signed to Bournemouth UK label "Streets Music" who will release their new album "Synchronise Your Leaders" along with a video for their new single "Lullaby" very soon, with a 2015 Radio promotion and tour. If anyone wishes to Book the band for their Events or Festivals, please contact us at: mikeynanton@hotmail.com ------------------------------------------------------------------------------------------- http://www.xovamusic.com http://www.soundcloud.com/xova-live http://www.reverbnation.com/xova